THE NEW WORK  : Simphony Of Dead 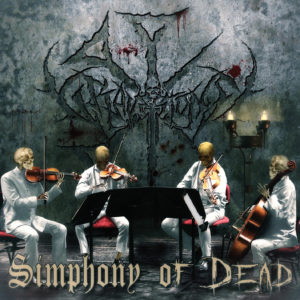 Gravestone’s latest work is this strange but intriguing mix between a lyric video and a real video clip, recordered, worked and post-produced by Giovanni Masotti and Daniele Coccia of “Videò”. You will be overwhelmed by a river of notes, sensations and emotions that will “force you” to look at it many times to appreciate every little detail; in short, an experience in which you will not know where to lay (and rest) your eyes.

The song is “The Deathwish” included in the first album “Simphony of Pain” (strictly with the “i”) of 1994 and re-arranged by the current line-up, the one of the Ep “Proud to be Dead” (except for a couple of new ones line-up entries). From here, the idea of ​​churning out an Ep called “Simphony of Dead”, which also includes another piece from the first album: the frantic “The children are Waiting”; the latter will be without video clips, but you can find it in the digital and physical versions (surprise edition 😜) of “Simphony of Dead”. The songs are edited for Elevate Records, recordered and mixed at “Trick Studio” by Andrea Mattei and have been mastered in “Finvox Studios” by Mika Jussila (Stratovarius, Lordi, Nightwish etc.); the artwork is by Gianluca Carlini of “JVA – Jahn Vision Art”.

THE VIDEO : The Deathwish

Gravestone formed in October 1992, with this formation: Marco Borrani (guitar), Marco Mangone (guitar), Andrea Cipolla (guitar), Andrea Esposito (bass), Massimiliano Buffolino (keyboards) Fabio Mociatti (drums and vocalist).
The band members come from different experiences and genres that all bring into the composition; in fact we dedicate ourselves immediately to death sounds but with funky, progressive and melodic influences. Right from the start the band is extremely active on the live scene In June 1994 their first album ‘Simphony of Pain’ is released.
Unfortunately, after the album the band split-up, until 2013 when a re-union took place thanks to Massimiliano Buffolino and Marco Borrani who reconstituted the band with new elements, to pick up where they left off.
In the same year, the band signs a 3-year contract with Sliptrick Records, but some problems (line up, different musical views) bring the band to its end (eh already … another time!).
However, Marco is strong and refuses to give up. In no time, he finds new musicians and forms the new Gravestone line-up
After some time in the rehearsal room, the “new” Gravestone begin the recording session to bring to light “Proud to be dead”, the mini-cd released in February 2017. Obviously, the setbacks are always at the door and , during the recordings there are new formation changes: Gabriele Maschietti (Crystal Fury), becomes the new “axe” of Gravestone.

In May 2017, immediately after the show with the “Onslaught”, due to different points of view, the band decided to replace Alessandro with the voice and replace it with Daniele Biagiotti .
After almost a year having dealt with prestigious live (I Am Morbid, Immolation, Agglutination Metal Festival) with him, Fabrizio Di Carlantonio is removed from the band for incompatibility of character and approach towards the Gravestone project, disappointing the expectations placed in him . From that moment on, the talented David Folchitto (Fleshgod Apocalypse and Stormlord) on the drums entered the band while, in January 201,8 he returned to the most motivated band Massimiliano Buffolino.

So, FINALLY (and for a long time, let’s hope!), La Fenice can born again from its ashes and the show can begin …