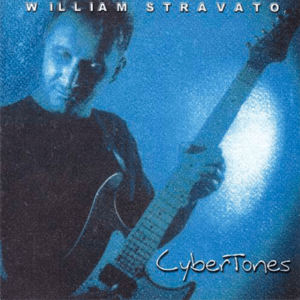 Cybertones is the second album by William stravato, released in 2002, two years after his debut “Survivor’, finally available on all digital music platforms. His music is inspired by jazz, fusion, rock and progressive. His inventiveness and taste float on a musical base of absolute value. The evidence of bassist Mario Mazzenga and keyboardist Luigi Mas stands out immediately. William creates melodies and sounds with the guitar that paint melancholy, winter and at the same time summer and joyful landscapes. In the end, those who choose to create only instrumental music must be aware that it may not be enough. In this case Stravato gave his best because his music infuses sensations and captures the viewer’s attention in an all-encompassing way. The first track of the album ‘Survivor’ sees the participation of Brett Garsed who engages in the first solo of the disc. The influences of fusion guitarists like Allan Holdsworth and Jeff Beck are clear and evident, even if they are frequent of typically heavy and rock approaches to songs. a work inevitably destined for a prepared and numerically limited, but not exclusive, audience, given that everything in Cybertones is aimed at obtaining real songs.

Survivor is William Stravato’s debut album, released in 1999 for Virtuoso Records. LISTEN AND BUY This debut album immediately sheds light on William’s open-mindedness that spans across different genres, from the powerful opener “Icarus Suicide” to off-beat and jazz “Cats”. Obviously as it will also be in all the following [READ MORE]