We are happy to announce a new band on the Elevate roster. These are the Chilean ESPADA who will soon come out with their debut album “Caleu” in digital and physical format. 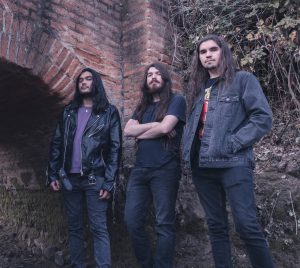 Espada are Lucas Fermandois on bass and fretless, Nicolas Young, guitars, keyboards and singing and Carlos Pereira on drums. They plays  a classic power metal inspired by the golden years of 80s metal that will make you jump from your chair more than an enthusiast of the genre. The use of Spanish as a sung language brings to mind the glorious groups of the Spanish power tradition.

Lucas and Nicolas have been playing together in different metal bands since 2015 and at the beginning of 2020 they decide to create a new project mixing power, heavy and with touches of progressive metal. To close the trio will arrive Carlos and with his contribution they have managed to write and realize Caleu, the debut album that will be released by elevate Records in October.

Caleu’s concept is about ancestral myths, legends and stories of the central valleys of Chile, and the beautiful illustrations in the booklet are all inspired by these themes.

Although grown up with bands like Rhapsody of Fire, Stratovarius, Dream Theater and Symphony X, Espada still develop a more essential and basic sound that takes us back to the origins and could be cataloged in the NWOTHM vein.