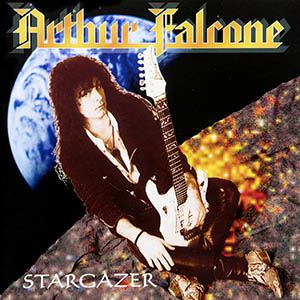 8 when we received a proposal from our friend Arthur Falcone, to publish his first solo album, a very beautiful record, a neoclassical style but with pieces that were not a display of mere virtuosity but real songs. The icing on the cake is the participation of other talented musicians including Morby who played with LaRox with Arthur before joining Time Machine and then definitively joining Domine. ‘Stargazer’ was the right record at the right time. In fact it was a while since we were thinking of creating a brand dedicated to the ‘Virtuoso’ of the six strings and we decided to create the VIRTUOSO …. Here ‘Stargazer’ is not just a good record for us but a little piece of history that today we present again with pride.